Mott Haven and Port Morris residents—spared the worst in Hurricane Sandy’s rampage through the Northeast—have begun to clean up their neighborhood.

The area lost a beloved tree and suffered a manhole explosion that prompted a power shutoff, officials said.  High winds and street flooding caused minor damage, and several basements within blocks of the Harlem River were flooded.

Residents said it could have been much worse in the neighborhood.

“It was heavy around here, but nothing really happened,” said Monxo Lopez, 39, of Mott Haven. 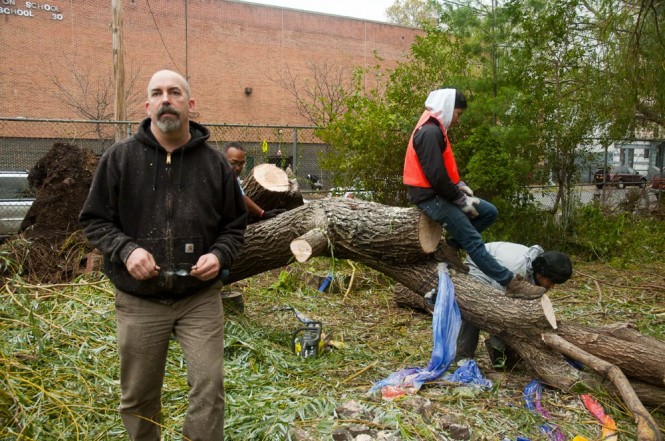 The storm uprooted one of two 40-foot willow trees in Brook Park, at Brook Avenue and 141st Street. Volunteers wielded chain saws, handsaws and wheelbarrows to take it apart and cart it away Tuesday afternoon. One worker said the willow had been there since 1999, when the trees were donated to mark the turning of the millennium.

“This one here was donated by the Botanical Garden,” said Manuel Castillo, 35, a volunteer who lives a block away from the park. “It grew and grew and grew.”

In the aftermath of the explosion, which forced Con Ed to cut power to the area, workers pumped water out Tuesday evening from a transformer pit at the site. Because of regular flooding from the nearby river, the transformer is designed to operate while submerged, Con Ed workers said, but they were pumping it out to find what caused the explosion.

“The restoration of power is going to take a while,” said Steve, a Con Ed worker who declined to give his last name because he was not authorized to speak to the media. “This is gonna test New York as a city. The main things we’re used to, we’re going to have to live without.”

“This is the one they were predicting. Subways, shutting them down – they made a good call. Saved a lot of lives. People don’t see the inherent danger. You have to respect the inherent power of what electricity does,” he said.

There was also a manhole explosion at 138th Street and Walnut Avenue, police said, and some flooding hit the New York Post printing plant on the waterfront in Port Morris

At 11 Bruckner Blvd., building supervisor Victor Rodriguez had an electric pump running to get approximately 8,500 gallons of water out of the basement.

“This is the worst I’ve ever seen it since I’ve been working here,” said Rodriguez, who has been employed there about four years.

Their building sits just one block away from the Harlem River, and Rodriguez said he was used to the river rising during heavy rains and the water bringing up manholes. But not like this. Rodriguez had been pumping out water for 12 hours, with no noticeable effect.

Triboro Fibers, a recycling center on East 135th Street, opened at 7:00 a.m. Tuesday after closing during the storm. Floodwaters had reached the street, said Raul, an employee, but no water came into the building.

John Mertens, a metalworker at a shop a few doors down, reported a more harrowing experience.

“It was pretty insane. The water was inches from me but didn’t flood in. It flowed on by and down the street. Waist deep,” Mertens said in an email.