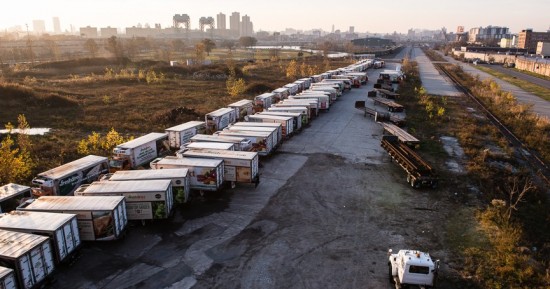 FreshDirect arrived at its proposed new home in the South Bronx ahead of schedule this weekend – and received a chilly welcome from residents unhappy to see the company at all.

Bright red tow trucks began hauling dozens of disabled trucks into a vacant  lot in the Harlem River Yards in Port Morris on Saturday, and by Sunday night there were at least 80, witnesses said.

The trucks were damaged in Hurricane Sandy, the company said in a statement. The storm also knocked out the company’s computer servers and forced cancellation of service for several days.

“In the aftermath of the storm, we needed to quickly relocate our damaged trucks,” the statement said. “So we stored some of them at our Harlem River Yard site.”

South Bronx activists immediately called foul, accusing the company of abusing the controversial waterfront site before it has even moved in.

“This just proves what we’ve been saying all along, that there are people who see our land as a wasteland, a dump,” said Monxo Lopez, a Mott Haven resident. “They bring contaminated trucks and just dump them here.”

Members of the group South Bronx Unite!, who are suing to keep the company out of Port Morris, say storm-damaged trucks may be contaminated.

The company said the move is temporary, until the trucks can be repaired and returned to service. The statement did not say precisely how long the trucks would be there or even if the company has signed a lease yet.

“We hope to have them removed as soon as possible and have been working around the clock to restore our fleet to full strength over the coming weeks,” the statement said.

Peter Ajemian, a spokesman for the company, declined to respond to further questions.

Lopez is part of a group of Bronx residents who have filed suit against the company and a number of city agencies over the proposed relocation. Organized under the banner South Bronx Unite, the group has criticized the $127 million in state and city subsidies proposed to keep FreshDirect from moving out of New York.

The suit, filed in June, contends the relocation plan relies on an environmental study from 20 years ago, when the area was almost entirely industrial. With the departure of manufacturing and the housing boom in the nineties, a portion of Port Morris was rezoned to residential and mixed use in 2003.

The suit demands that the company conduct a new environmental review before the relocation plan is approved.

At a meeting in September, FreshDirect CEO Jason Ackerman said a new environmental study would derail the project because the lengthy process would choke the company’s ability to expand. The company has promised to create up to 1,000 new jobs in the Bronx.

Lawyers for FreshDirect contacted the group’s lawyer, New York Lawyers for the Public Interest, on Friday, saying that the company was thinking about storing the trucks at Harlem River Yards.

After consulting with South Bronx Unite members, Lawyers for the Public Interest told FreshDirect that moving the trucks to the site violated a friendly agreement between the parties that gave FreshDirect extra time to file their answering papers in court. Lopez said the agreement in September gave the company extra time on the condition that “construction doesn’t start and the status quo is preserved.”

Lawyers for the Public Interest did not respond to phone calls seeking comment.

The dispute over the trucks comes as opposition mounts to the deal to relocate the company. On Wednesday, the New York Association of Grocery Stores and John Catsimatidis, CEO of Gristedes grocery stores, is set to announce their support for South Bronx Unite at a press conference at City Hall.

“My basic concern is that the city or the state is using my taxpayer money to fund competition for me, and competition to some of our other friends in the Bronx,” Catsimatidis said. “I think that’s wrong. If people want to go into business, that’s fine, let them use their own money.”