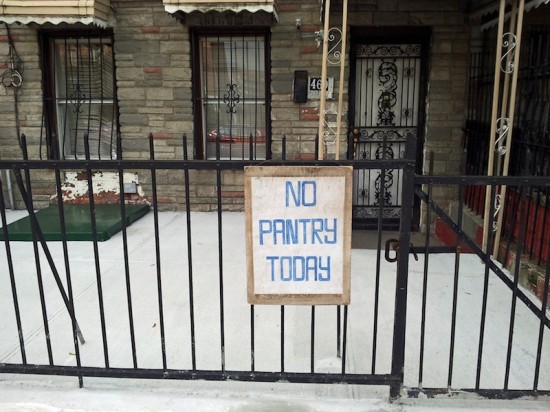 A placard on the front gate of a food pantry on E. 134th St. offered bleak prospects for Mott Haven residents hoping for some help. (Nicholas Wells)

Nearly 200 people lined up outside St. Peter in the Bronx Lutheran Church on East 140th Street on a Wednesday afternoon in September for a bag of red peppers each.

The food pantry at St. Peter is one of many in the neighborhood struggling to serve the community’s hungry in the wake of state and federal budget cuts.

“They don’t give meat, they don’t give cheese,” said Mott Haven resident Sarah Oliver, who was making her first visit to the pantry. “They usually only give canned vegetables.”

Oliver began going to pantries to help feed herself and her son after they lost their home in the mortgage crisis, she said. A supervisor at Bloomingdale’s, Oliver said she doesn’t make it a habit to go to pantries for help, but added “a paycheck can only stretch so far.”

Federal budget cuts have slashed funding for the Emergency Food Assistance Program in the past year. Triada Stampas, a spokeswoman for Food Bank for New York City, a non-profit that works with 850 pantries and soup kitchens throughout the city, said the cuts have resulted in a 40 percent reduction in food they can provide. Citywide, 11 million meals were cut, 2.2 million of them in the Bronx, Stampas said.

“We’ve gone from serving upwards of 200 families two bags weekly,” said Pastor Paul Block, the minister at Transfiguration Lutheran Church on nearby Prospect Avenue. “We’re down to once a month and one measly bag that’s not very diverse.”

In 2011, budget cuts forced 97 percent of Bronx pantries to reduce the amount of food they distribute, turn away residents or both, according to the Annual Hunger Survey compiled by the New York City Coalition Against Hunger.

The coalition is currently compiling information for the 2012 survey and doesn’t release preliminary results, but spokeswoman Theresa Hassler said that prospects are grim.

“It’s not better,” Hassler said, “the problem isn’t going away.”

Emergency food assistance organizations are paying special attention to the U.S. Farm Bill, which expired on Sept. 30 and Congress has yet to re-sign. The bill provides funding to the food assistance program and food stamps, as well as subsidies to farmers who sell their surplus crop to emergency food programs.

A version of the bill that recently passed the Senate Agriculture committee proposed $4.5 billion in cuts, which would mean 190,000  households in the city would lose $90 a month in food stamp benefits, Stampas said. Reductions in food stamp benefits would increase dependence on pantries, she added. A similar proposal in the House would cut $16.5 billion.

House Republicans announced in September that Congress would take up the Farm Bill only after the presidential election. Both Hassler and Stampas expressed hopes that a lame duck session could mean speedy passage for the bill.

“While it may be called the Farm Bill, and New York City doesn’t have a lot of farms, New York City has a lot at stake,” Stampas said.

Far from Washington, Sarah Oliver is concerned about what federal budget cuts mean for the South Bronx. “We have a lot of families that depend on pantries,” she said.

Oliver supports President Obama’s reelection, saying that the economy hasn’t been given the chance to recover. “It’s like a wound,” she said, “it takes time to heal.”