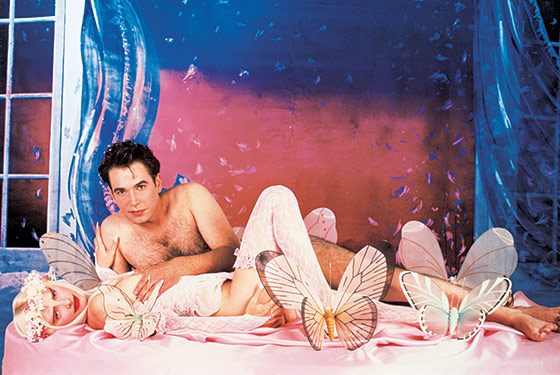 These days, Jeff Koons, art world king and kitsch master galore, prefers a tailored blue suit more befitting Wall Street than the Lower East Side art galleries. But in 1990, Koons bared all in his most controversial project, Made in Heaven.

“If you jack off to a Koons painting, you are using it as pornography,” Keller says.

“My first boyfriend first masturbated reading from the New Testament.” Koons also found inspiration in the church or in artists who produced work for the church: Cicciolina’s face in “Silver Shoes” is sourced from Bernini’s “Ecstasy of St. Teresa.”

“He’s exploiting her… Exploiting who she is, and exploiting her vagina. He’s doing all of that. Artist as asshole,” Keller laughs. “I think the reason it offends people the most is that it’s a joke.”

Indeed, Koons can perform this whole song-and-dance about being “the contemporary Adam and Eve,” but it’s really just a joke on everyone else. He ends up maintaining “the one-sided, often predatory and possessive inclinations of husbands to their wives.” Keller is less of a firebrand than I would like, but the meaning is clear. Koons doesn’t criticize, he relishes.

So why isn’t Made in Heaven as shocking as it was 20 years ago? Public decency is not the hot topic it was back in the days of Jesse Helms and the Culture Wars, and an “artists as jokers” ethos has inundated the art world, thank largely to profit-driven artists like Koons and Damien Hirst. Also, Keller adds, “now you have sites like XTube where people can watch married couples fuck for free—it’s not as shocking, so that value has been lost.”

It’s no coincidence that Koons worked as a commodities trader while he waited for his big art-world break. He operates in a post-Warhol world of “artist’s life as art” and “art as commodity.”

“Marriages are economic contracts after all,” Keller said, and a big part of Made in Heaven is that they’re just married, and “he’s got that smarmy little smirk, you know, on his face because he bagged the Italian porn-star. That’s gross; it’s icky.”